Welcome to Enon Veterinary Hospital in Enon, Oh.
We are here to care for and treat your companion. Our goal is to help your pet live a long, happy, healthy life.  We are a full-service hospital for most surgical and medical conditions as well as preventive medicine.  We also offer grooming, prescription diets and boarding.   We are committed to a professional, caring and personalized medical plan for your pet.  We are in partnership with the Med Vet Network, comprised of specialty veterinarians in Dayton, Cincinnati, Columbus and Hilliard, Ohio.

Enon Veterinary Hospital was established in 1974 by Dr. Richard J. "Doc" Schumann. He is a native of Enon, Oh, graduated from Ohio State University and returned home to build his own practice on the property he grew up on as a child.

Dr. Lisa Roth, received her Bachelor degree in Zoology from Ohio State and continued on, graduating from OSU's Veterinary School in 1997.  Dr. Roth joined Enon Veterinary Hospital in December of 2013.

Our wonderful staff are eager to help and inform, care for and comfort you and your pet. Please take a moment to explore and enjoy our website today.To find out more information about how Enon Veterinary Hospital can serve the needs of you and your pet feel free to give us a call! 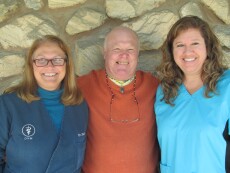